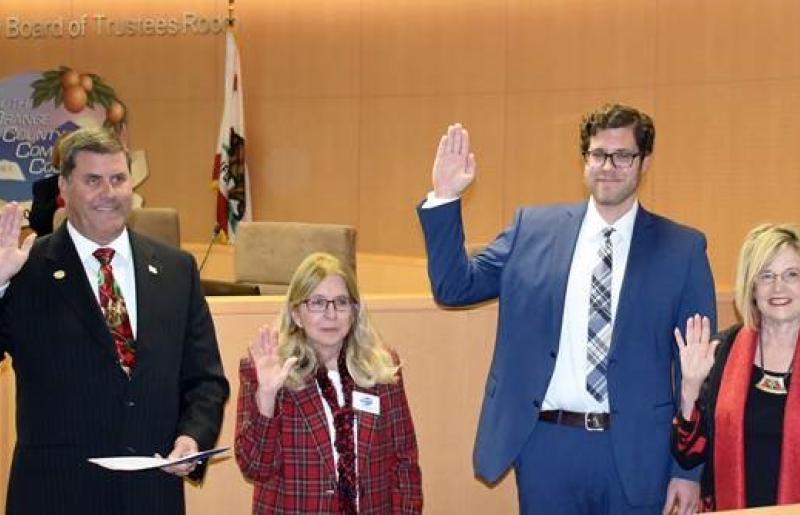 MISSION VIEJO, CA – On December 12, 2022, the South Orange County Community College District (SOCCCD) Board of Trustees held an organization board meeting, which also served as a swearing-in ceremony for recently elected trustees and election of the board executive leaders.

Officially sworn-in by Orange County Superior Court Judge Gassia Apkarian—Marcia Milchiker (Area 5), T.J. Prendergast III (Area 2), and Terri Rydell (Area 4) are re-elected to serve on the SOCCCD Board of Trustees for another four-year term, while Ryan Dack will begin his first two-year term as trustee, representing Area 6—filling the term vacated by former Trustee Jim Wright who retired this summer.

“As an educator and supporter of public education, I am honored by the trust of the voters of Area 6 to represent them on the South Orange County Community College District Board of Trustees. I am excited to get started and eager to work alongside my new colleagues,” said Trustee Ryan Dack.

Dack comes to the SOCCCD Board of Trustees with experience as a teacher in the Laguna Beach Unified School District. He earned his bachelor’s degree from San Francisco State University in 2013 and a master’s degree from the University of California, Irvine in 2018. Ryan’s priorities while serving on the board are affordability, efficiency, and safety, with a strong commitment to keep community college education affordable for all students.

In addition to the oaths of office, the Board of Trustees unanimously elected new board leadership effective immediately. Trustee Tim Jemal was elected to serve as Board President, Trustee Terri Rydell, as Board Vice President, and Trustee Carolyn Inmon, as Board Clerk.

After the election, President Tim Jemal said, “I am honored to receive the vote of confidence from my colleagues on the Board of Trustees. Serving as Board President allows an opportunity to work closely with the Chancellor, district, and college leadership on shared goals that uphold our commitment to provide world-class and affordable education for learners from every walk of life throughout the South Orange County Community College District and beyond. I look forward to a great year.”

The organization portion of the meeting also included recognition of Trustee Marcia Milchiker who was honored with a commemorative globe from Chancellor Barnes and the Board of Trustees for her service as President of the Board for the 2021 and 2022 years.

Chancellor Julianna Barnes, who works closely with the Board President on important district matters involving students, staff, faculty, and the community at-large said, “As an incoming Chancellor, Marcia Milchiker was incredible to work with, as she helped provide a great deal of district insight and leadership during my first months in the new role. I look forward to working with President Tim Jemal in the coming year and I am excited for what 2023 has in store under the new leadership for SOCCCD.”

SOCCCD Board of Trustees were also appointed to various internal and external committees during the organization meeting and are expected to report on activities of those committees during future board meetings.

The South Orange County Community College District meets once a month, typically on the last Monday. Agendas and streaming of each board meeting can be found by visiting www.socccd.edu.